Nostalgia is complicated. More than just a noun, it’s a feeling. It can be imagined, vicarious or borrowed. It is an impression of the past supercharged by time and distance. Memories have the potential energy to cast an illusion on our present state. Not just onset by affection, loneliness or despair often elicit the strongest responses. Nostalgia is the longing for the good and the bad, when you feel emptier for either.

Nostalgia translates as the suffering caused by an unappeased yearning to return: nostos is the Greek word for “return”, and algos, “suffering”. The ancient Greeks illustrated this theme often in their epic plights of heroes returning home by sea (i.e. Homer's The Odyssey which unfolds around Odysseus’s attempt to return home after battling in the Trojan War).

Consistent with its Greek origin, rooted in "homecoming" and "pain," for centuries nostalgia was considered a potentially debilitating and sometimes fatal medical condition expressing extreme homesickness. The word nostalgia was first coined as a medical term in 1688 by Johannes Hofer, a Swiss medical student who used the term to describe the psychological condition of longing for the past.

The definition of nostalgia has shifted greatly over time. The modern view is that nostalgia is an independent and even positive emotion that many people experience often. Vicarious nostalgia is a feeling of wistful yearning for a moment that occurred prior to, or outside of, the span of one's memory, but is relatable (especially by way of sentimental value) due to repeated exposure. In today’s landscape of oversaturation and overstimulation, nostalgia-evoking references are strategically placed to create a sense of connectedness between the human mind and commodities.

Nostos explores nostalgia through various facets—the whisper of a tie, or some fairy tale pastiche conjured from storybooks and nightmares, an unidentifiable place rooted with the archetypes of domestic banality, or subtle color palettes and architectures that isolate the particular penchants defining an entire decade. 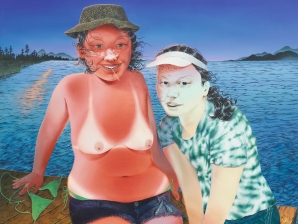