A plot hole is a gap or inconsistency in a storyline that goes against the flow of logic established by the story's plot. These inconsistencies include such things as illogical or impossible events, and statements or events that contradict earlier aspects in a storyline.

Herschlein produced his last body of work, (titled Night Pictures) at his childhood home in Bayville, Long Island, in order to explore the specific kind of aloneness he felt growing up in the suburb. Night Pictures presented the voyeur (a self portrait of sorts) looking in from the outside—exhibiting a specific kind of emotion, especially melancholy that is expressed in solitude or proximity to the self. Conversely but in accordance, Plot Hole welcomes the voyeur physically inside of itself. The four relief panels presented by Herschlein in this exhibition provoke from the inside out, with the body punctured by domestic items that have some type of unspecified importance situated within an open-ended narrative. In keeping with the language of fiction, these devices could be considered MacGuffins (a plot device in the form of some goal, desired object, or other motivator that the protagonist pursues, often with little or no narrative explanation. The MacGuffin's importance to the plot is not the object itself, but rather its effect on the characters and their motivations).

Herschlein’s medium’s are among the most ancient in art making—plaster relief on wood panel. Neither singularly sculpture or definitively painting, Plot Hole is comprised of sculptures that exist on the picture plane. Body parts are features cast from Herschlein’s own including hands, feet and face. The works are surreal portrait-studies of an amnesiac, a character who does not understand who they ended up at this point in the story; self-reflective scars that emote for our gaze. The viewer has the opportunity to become the voyeur, left to unpack the works with understanding if they so choose. The artist and viewer are both essential in the disruption or reclamation of the narrative, and thus the activation of some healing process. Here narrative and story telling are tools to reclaim and inform new attitudes, build new structures, and new lives. This kind of positive effect is up to individuals, artists of all kinds, and communities at large. Plot Hole is a series of realizations in this sense, but while these works depict something proactive, they still acknowledge the heavy baggage that has to be sorted in the face of building something new.

Dan’s compositions are conduits for looking to the things we already know are there. The scenes touch on a reality, right outside of ourselves but leave space for a new narrative. Plot Hole foregrounds certain things that live inside of us—fear, anxiety, and sadness to name a few. These unruly emotions are more often than not repressed. Herschlein’s emasculation of his own male body is especially a revaluation of maleness and its relationship to expression. Embedded within the taking apart is inevitable regeneration, and Herschlein creates a physical and psychological landscape for these emotions.

The genre of Herschlein’s work is horror, a word typically ascribed to film or books but rarely artworks. The most effective horror is established within experiences lying closest to our existence—metaphors for our most deep-seated fears—composed on the periphery, looking into the thing that’s already inside of you. It is the feeling of paranoia gained in a recognizable place set just outside of reality. Herschlein’s domestic obscurities serve as propositions for a knowable place where archetypes are suspended in bizarre anagrams—unwieldy body parts psychologically poised within a domestic sphere, and literally framed for introspection.

Horror fascinates the human psyche, and the closer it sits to home, the more thrilling. These uncanny scenarios are based in a domestic familiarity that is so ominous because it hangs on the precipice of familiar and fantasy. They are unsettling and deal with the darker side of the psyche, but are distinctly not aimed at conjuring fear (as the horror genre often is) but unpacking an empathy, or emotional understanding in the face of isolation and an awakening in the face of these emotions which we so often disregard, ignore, and repress. 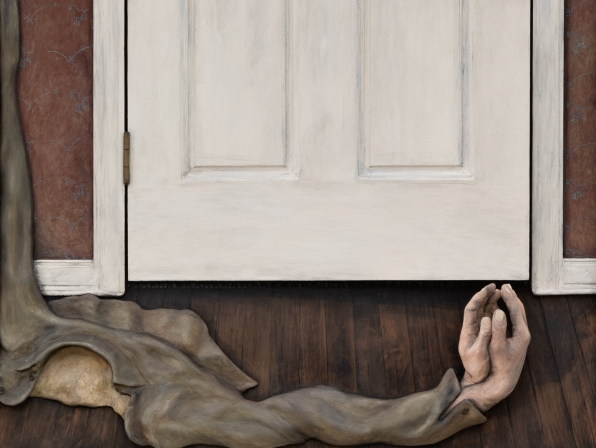