The white-guy smile of a Union soldier who knows that he is in too deep but denies that his feet are truly cold, 2019

...Meanwhile A Young God Pours Life On The Planet Kemetopia, 2019

Acrylic on tiled sheets of paper glued to canvas

The Pointless Libations of Blood, Sweat, and Arms of Two Soldiers Committed to Abating The Advancing Threat of Revitiligo in The Savage South, 2019

The Nighttime Encounter of the First Miasma, 2019

In The 22nd Century Ghosts N Goblins Walked In This Land, 2019

The Anguished Nativity of A Confederate Diver Under The Juniper Trees of Monument Valley, 2019

The Aftermath of the Night Air in the Valley of the Rocks, 2019

Sedrick Chisom’s large-scale landscape paintings envelop the viewer. When the Night Air Stirs presents a series of mixed media canvases which hang unstretched, in the style of tapestries. The format is traditionally-based, however Chisom's content is acutely and urgently topical, and conceptually-based on a paradigm shift for the future.

The artist's compositions reference the radicalized idioms of Victorian fantasy illustration, and use the romantic landscape as a site where the apocalyptic narratives of white supremacy, Christianity, and climate change intersect—a scenario in which most of the built environment has been obliterated and transformed into a toxic, hallucinatory wasteland.

These investigations are predicated on the colonial history of black spirituality being invaded by Christianity— a western religion that naturalizes, and even delegitimizes suffering (for example, within doctrine, Christ’s bodily suffering is already at all times more real than our own individual suffering). The artist pairs martyrs and other Christian subjects with Black Lives Matters imagery to meditate on this mentality and state of being—emphasizing the idea of seeing culture and the world through blackness. In effect, much of his work examines the ways in which Whiteness and Christianity have colonized the lives and sublimated the suffering of People of Color.

Chisom states, “I am concerned with the historical construction of whiteness in fiction as an antagonism between notions of civility and barbarism, the built environment versus the “natural” landscape—the civic human subject in relation to the monstrous absolute Other. I position the romantic landscape as disturbed by the traces of Western imperialism and structural violence through a process that involves layering, spraying, or scraping away. For me, painting is a process of agitating a sealed-away past as a means to reconstitute itself in the present. I reference contemporary Black Lives Matter imagery, medieval Christian iconography, figures from Western mythology/history, as well as details from my own idiosyncratic life story.”

Fascinated with thermal vision imagery, in its ability to highlight connections between seeing and violence, and preoccupied by Christian iconography, Chisom conjures images that are both warm and chilling, akin to a pietà surveilled by a U.S. Army drone. When the Night Air Stirs continues these themes and compose a sci-fi epic in which PoC have abandoned a dying Earth to explore the universe. As some of the remaining “wypipo” begin to develop darker pigmentation, their governments declare a state of emergency and send an expedition to the polar ice caps and Monument Valley in search of “Aryanness in other places.” Chisom’s ghostly figures float through a world of melting ice and societal decay that viewers may find hauntingly familiar. If the spectral landscapes and desperate faces – or postures, where there are no faces – don’t make it clear enough, Chisom has noted that these scenes are from “the final year of the Christian era.” It’s the end of the world, or at least the end of the world as “yts” know it.

“Year XX10, the final year of the Christian era. Twenty years after People of Color gave up on wypipo and left the planet to explore the cosmos, the enigmatic genetic disease revitiligo expresses itself amongst every yt on earth, imperiling whiteness. With no known cure, the remaining terrestrial nations of North America face unprecedented national turmoil as wypipo begin to develop dark skin pigmentation. President Maura Gardener of the Coastal Union of Civic States and President Ronald Tiller of the Confederate Disaffiliation of States concurrently declare a state of emergency for the countries they lead. A combined forces military operation between the Confederate Disaffiliation of States and the Coastal Union of Civic States is launched to search for Aryanness in Other Places. Scouts from both the CD of S and the CU of CS conduct a joint expedition in the polar ice caps of Monument Valley, where reports of monstrous people being sighted in the savage south have emerged...”
— excerpt from exhibition text for Chisom’s, The Ghost of White Presidents Yet to Come

Sedrick Chisom (b. 1989, Philadelphia, PA) lives and works in Richmond, VA and New York, NY. The artist received a full scholarship to study at Cooper Union. While at Cooper Union, Chisom received the Jacques and Natasha Gelman Foundation Award for Exceptional Ability. After completing his BFA, he received his MFA from the Mason Gross School of the Arts at Rutgers University. His work has been displayed at numerous group shows, including at JTT Gallery, Signal Gallery, and Abrons Art Center. He has been featured in New American Painters (Issue 134), Forbes Magazine, Artnet, and Artsy. He was recently awarded The 2018-2019 VCU Fountainhead Fellowship in Painting and Drawing and is currently in residence at Skowhegan School of Painting and Sculpture. 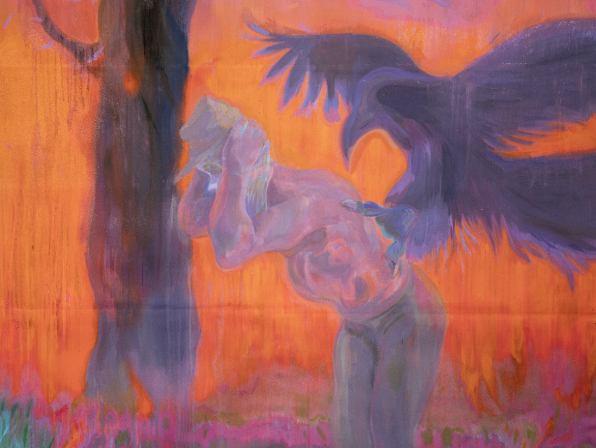