Matthew Brown is pleased to present a new body of paintings by Andrew Kerr and the artist’s first solo exhibition in Los Angeles.

The sixteen paintings that make up this show are varied: there are those that appear to capture pure intuitions and those that are striving to describe something—a scene, a place, objects—from the mind’s eye.

The exhibition’s title Bridge for July, might be indicative—an unfamiliar arrangement that has some sense nonetheless. Across the works, recurring motifs of rings, circles, and pointing arrowheads are tangible prompts and channel pictorial flow. The paintings also share a consistency of handling. Kerr’s surfaces invite moments of graphic clarity amongst fuzzy mid-tone color spreads; their delicate lines bring definition to looser, speculative modelling held in overlaid washes. Pattern deviation and wide distributions of painterly episodes animate the internal compositions. There can be low-key hues and scruffy textures; a consequence of George Braque's reassurance, and a reluctance to give up on a painting.

There are suggestions of unpeopled exterior views, for instance in Fruitpickers' Hut we see a roof, a door, perhaps a tree, all cloaked in a warm grey lavender gloaming. Their imagery is mysterious and associative. In other paintings there are hints of machinery, mechanical processes, and parts in motion. Teeth, filters, and vibrations act out these circulations within toiling systems.

And there are paintings that bear little resemblance to the material world, yet may not be entirely abstract. For Kerr there is no definitive source, the compositions are describing themselves.

Born of a daily studio practice these works have evolved out of a dedication to the act of painting. Each piece contains imaginative fictions, aiming beyond the artist's limitations; they offer their visual attributes foremost for consideration.

Last year Andrew curated an exhibition at the Hunterian Art Gallery titled 'Years Off The Schooling: A Selection From The Hunterian'.

A comprehensive new publication of Andrew’s exhibitions and works was published by The Modern Institute in 2020. 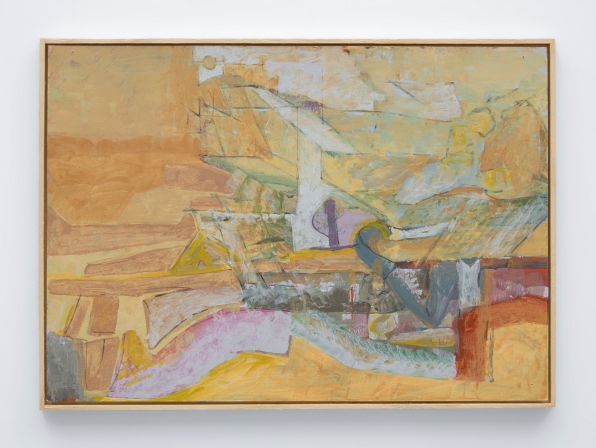